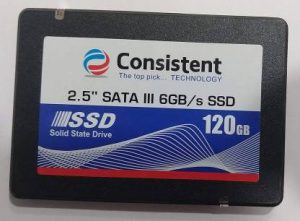 Consistent 120GB SSD Drive is a type of computer storage device. This non-volatile storage medium uses solid-state flash memory to store persistent data. Traditional hard disc drives (HDDs) are being replaced in computers by SSDs, which perform the same basic operations as a hard drive. SSDs, on the other hand, are substantially faster.

Business: SSDs are frequently used by companies that operate with large volumes of data (such as programming environments or data analysis), as access times and file transfer rates are crucial. 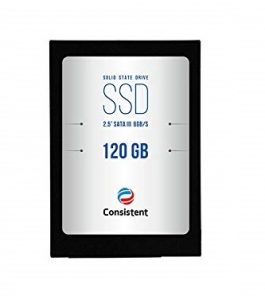 Gaming: Gaming computers have always pushed the boundaries of current computing technology, necessitating the purchase of very expensive hardware for the sake of gaming performance. This is especially true in terms of storage, because modern blockbuster games are continually loading and writing files (e.g. textures, maps, levels, characters).

Large files may be accessed fast with SSDs. Quicker boot times and better performance. The drive is more responsive and delivers superior load performance because it does not need to spin up like an HDD.

SSDs do not have moving parts, they are more shock resistant and can withstand heat better than HDDs.

Due to the lack of moving parts, SSDs consume less power than HDDs. There are no moving or rotating parts in SSDs, they make less noise. HDD sizes are limited, whereas SSDs available in a range of form factors. Consistent 120GB SSD Drive Comes with 3 Year of warranty.

There are no reviews yet.